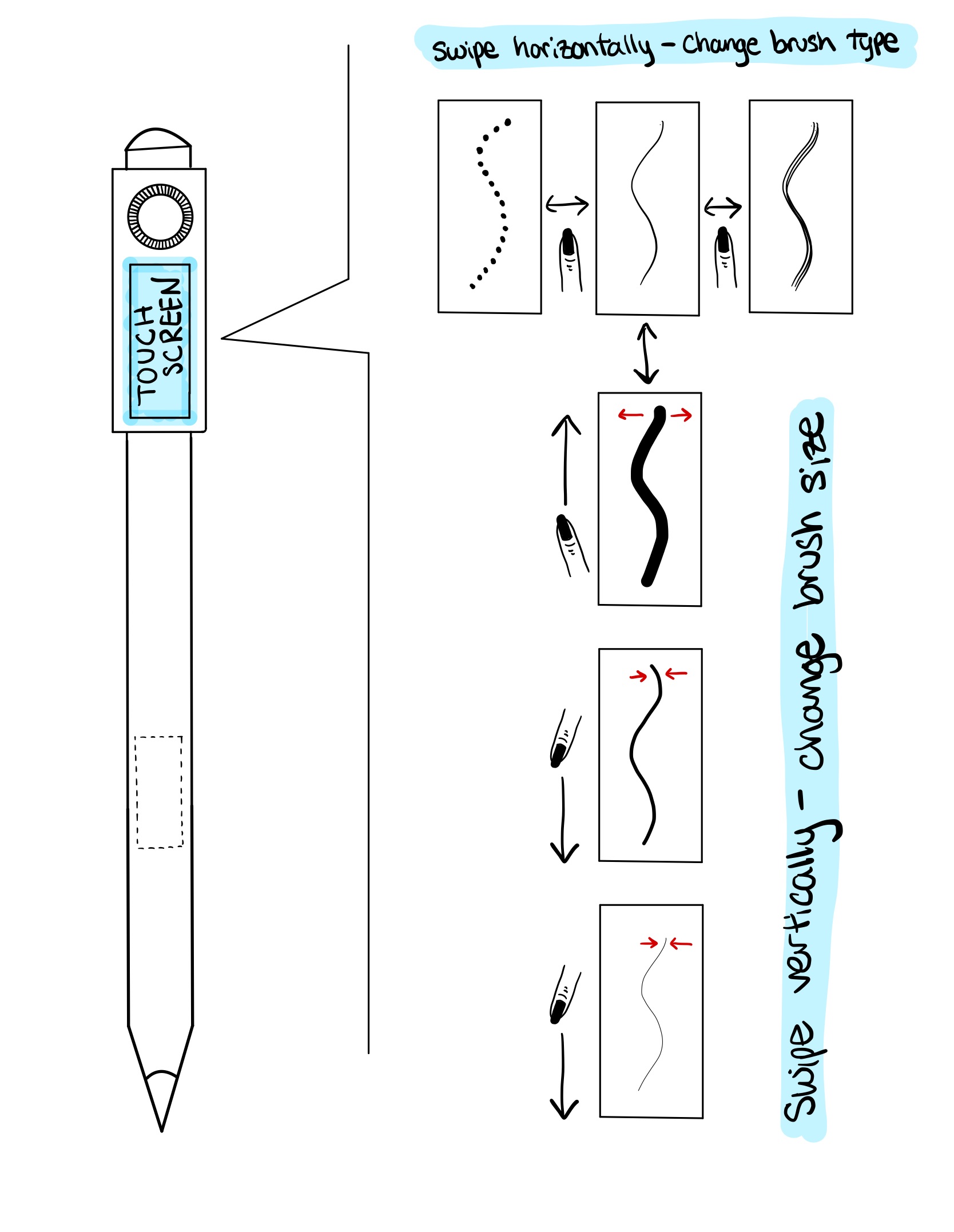 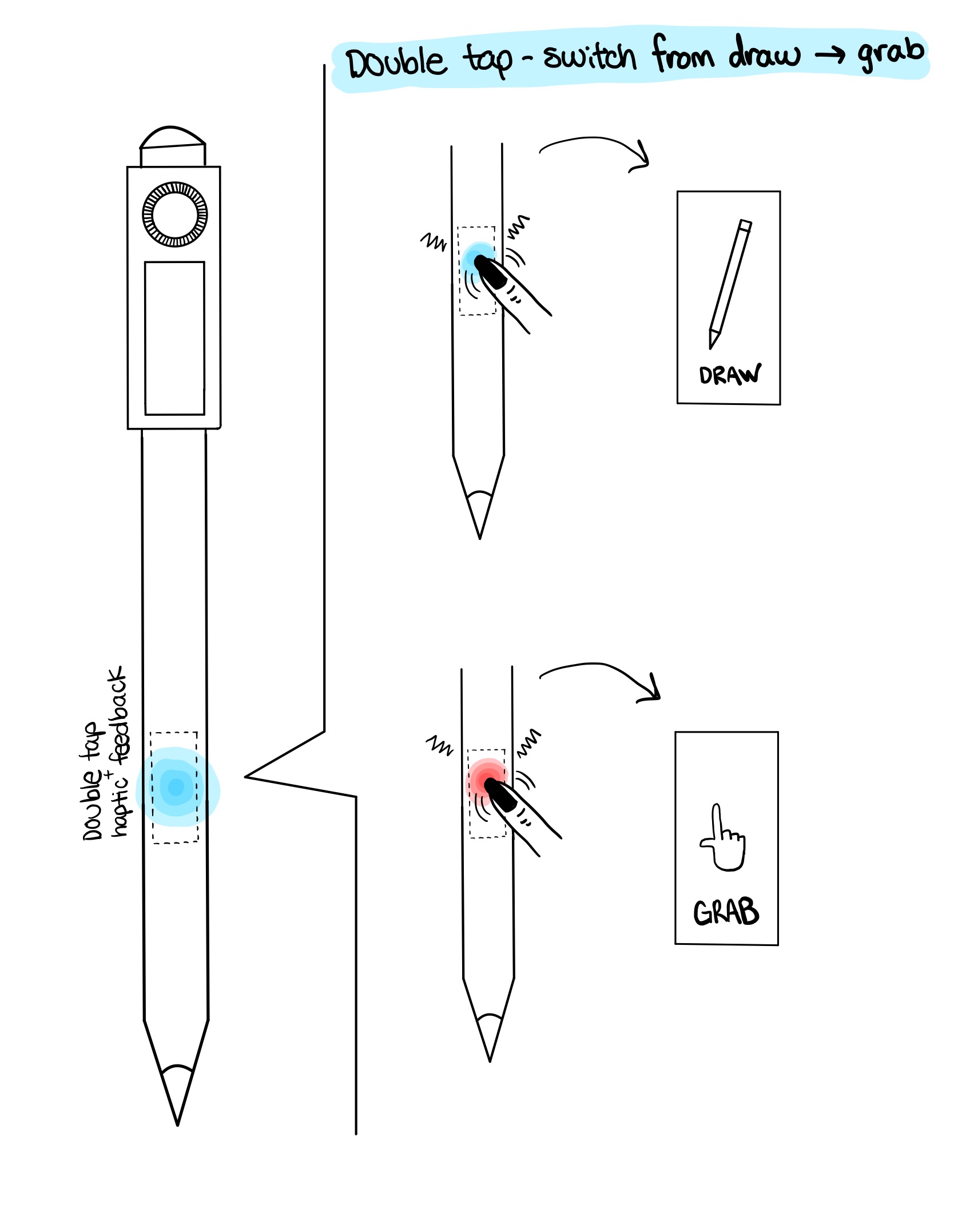 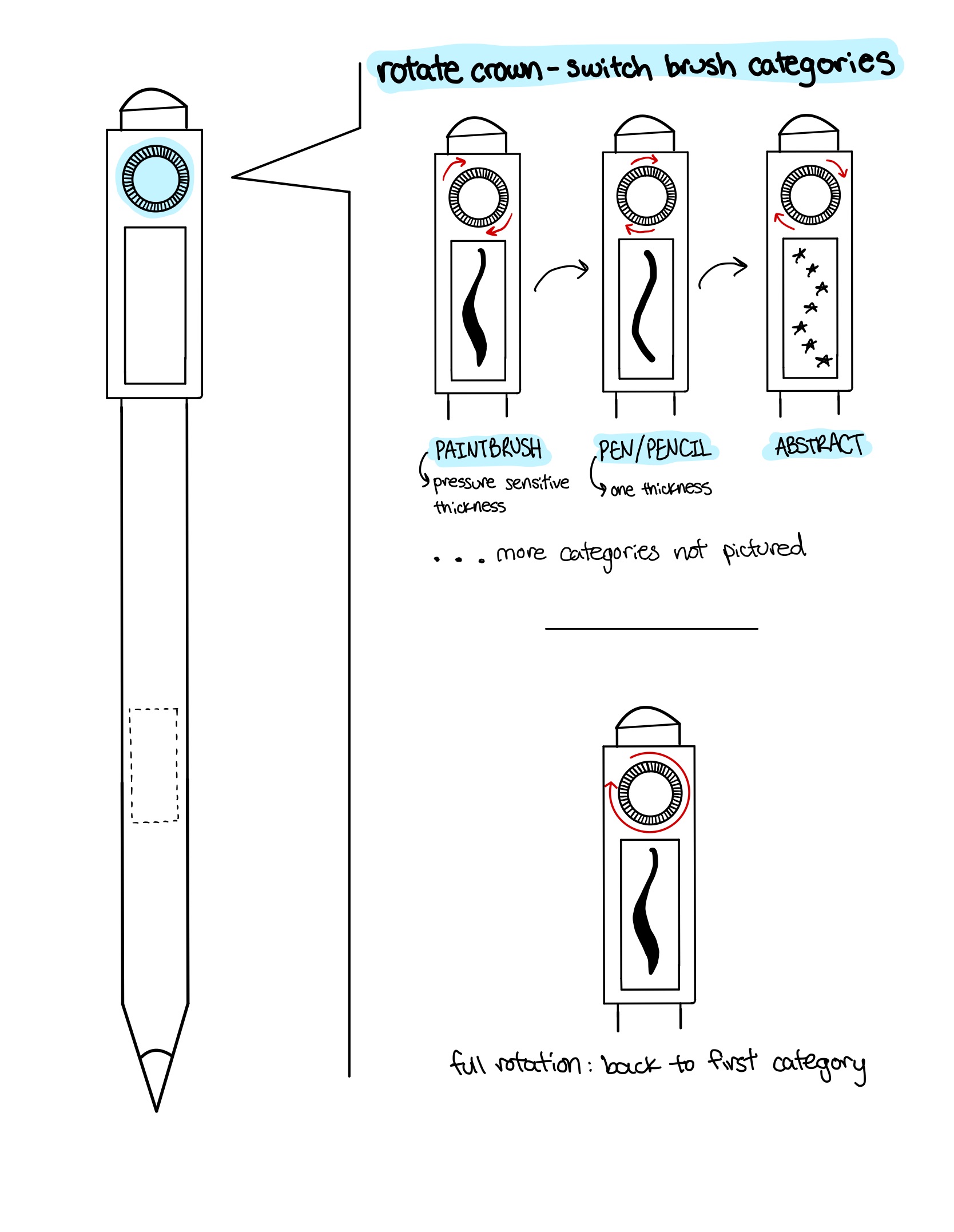 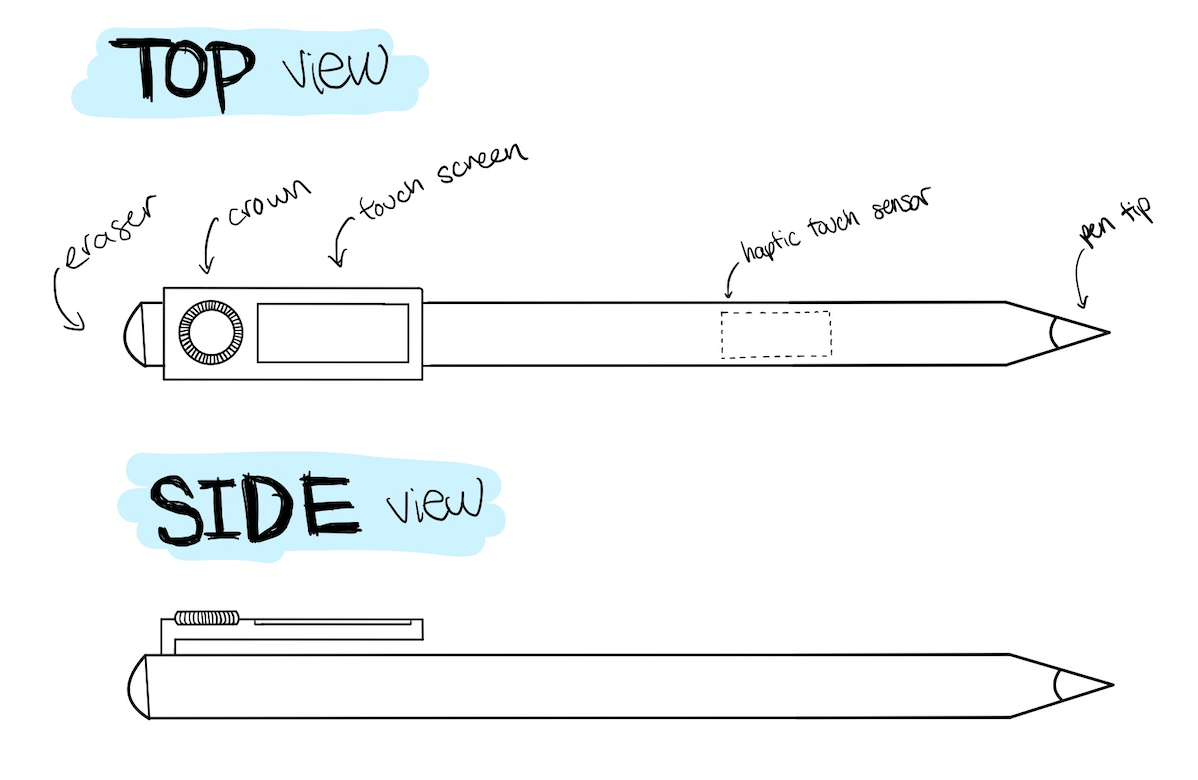 Digital artists want to be able to use the apple pencil to better facilitate their art on an iPad, but they can't because some features of the pencil is to much like a normal stylus.

The general schematics of the redesigned Apple Pencil are geared towards graphic designers and artists. The body and aesthetic of the stylus were preserved with the addition of a few features the user found useful in simulating their experience in existing non-digital art mediums.

Allows the user to have visual feedback on what is being selected and a preview of what tool is being used before actually using it. There is the ability to switch between brushstrokes within a category by swiping left and right, and to choose brush thickness by sliding up (thicker) and down (thinner). This design decreases the number of barriers for the user to decide which tool to use during the artistic process. By incorporating everything related to the drawing tool into the pen (the physical drawing tool), it provides the user with an isolated user experience. The user can draw without having to switch between brushstrokes within the canvas (iPad application). In real life, users change pens or brushes without interacting with the canvas, and this design aims to emulate that experience. The user can change brushes and width sizes by interacting with the actual drawing tool versus the tablet.

Allows the user to precisely scroll through different brush categories. Procreate (iPad drawing app) has a wide array of different brushes bundled by similar characteristics, which reduces the time the user takes to find specific brushes. During the design process, the user stated that navigating to different brushes is overwhelming and tedious. Having to stop drawing to select a brush interrupts the drawing process, and the vast array of brushes doesn’t make choosing one any easier. From the perspective of exclusively interacting with the stylus, implementing a digital crown makes this process simple. The user can choose their desired brush without having to navigate through an external application. Additionally, a small addition to the Procreate software to bundle brush strokes by “last used” would further support efficiency by reducing time spent twisting the crown.

This function of the original Apple Pencil will be improved. Firstly, the addition of haptic feedback when double-tapping. Currently, the user is unaware if they double-tapped when switching between tools, which leads to mistakes. For example, when the user is in drawing mode and accidentally double-taps, the eraser tool is executed and erases part of the drawing. This is a frustrating and common occurrence, and due to a lack of feedback. Secondly, instead of double-tapping to switch between the eraser and drawing tools, it will be used to switch between the grabbing and drawing tool. The grabbing tool allows the user to move items on the canvas without drawing anything. This functionality reduces navigating cumbersome UI of different buttons, and provides the user with a more realistic experience that relies heavier on the pen versus the tablet. This replicates the way an artist interacts with their drawing tool outside of the electronic space.

I implemented a simple and impactful redesign of the eraser tool. The original pencil has a non-intuitive mapping of this function, because the user has to double-tap to activate. The redesign automatically senses when the pencil has been flipped upside down to the eraser side, and will switch from the drawing tool to the eraser tool. During the elicitation session, the user voiced that it was frustrating to double-tap to erase as it went against her long-ingrained instincts of using a traditional pencil eraser.

So who's up next? Simplifying the trampoline park experience for kids.
Learn more
View
front-end design intern

A responsive and interactive website for a Korean restaurant in Ithaca.
Learn more
View
Rapid Prototyping

To build a machine that places beads onto a pegboard, based on a data file.
Learn more
View
3D Product Design